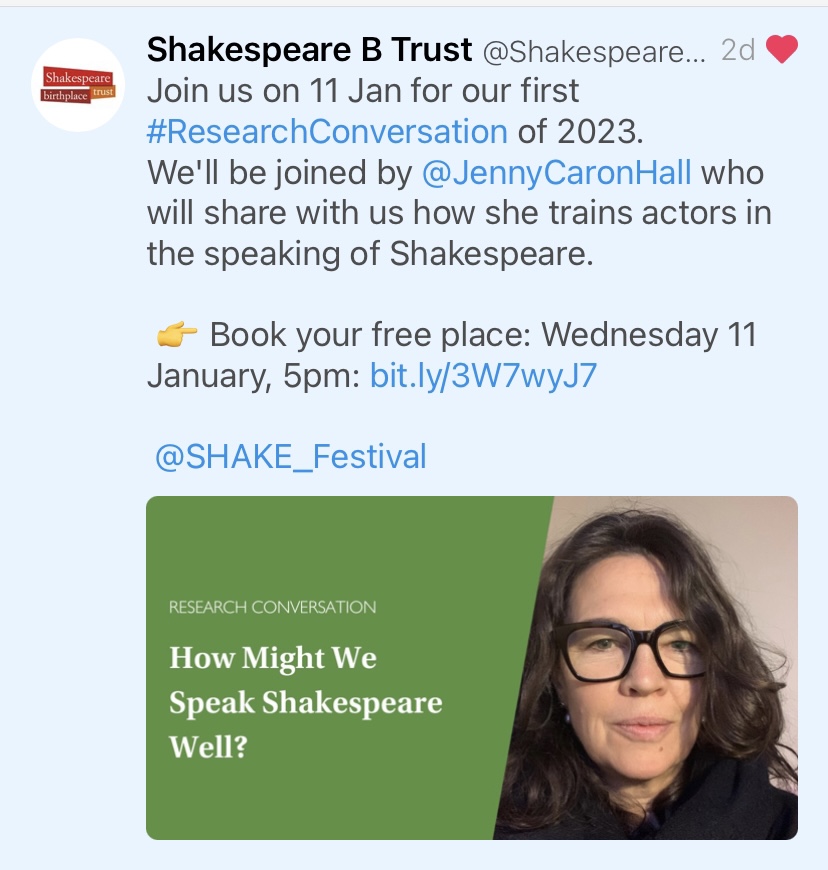 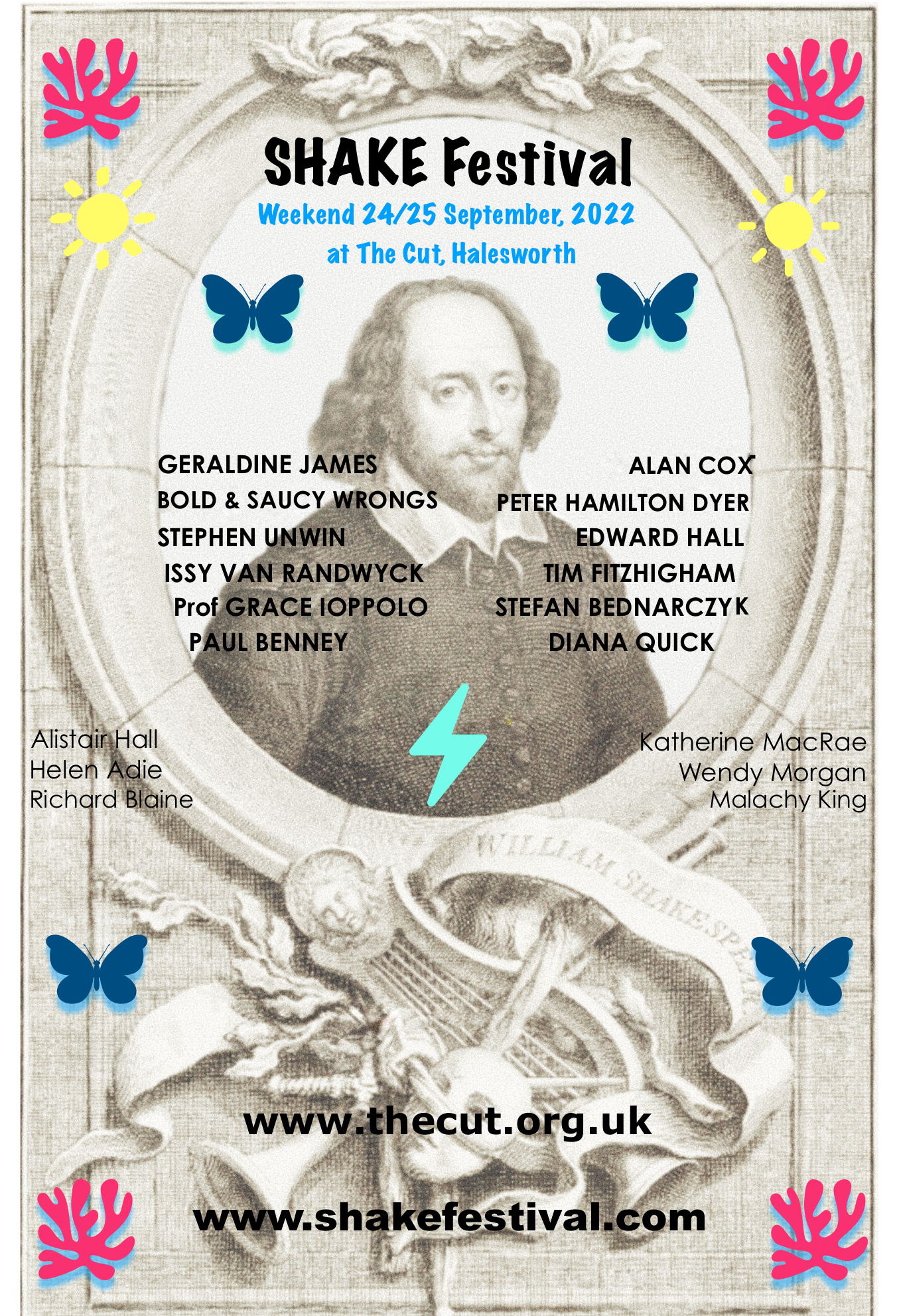 Very uplifting and inspiring ♦ A spectacular success
What a big-hearted, fascinating, generous festival! ♦ Compelling and funny
It was like a really thrilling, stimulating party ♦ I loved it very much
I loved hearing Edward Hall talk ♦ I loved the whole weekend ♦ It was hugely enjoyable
Great fun and a brilliant experience ♦ Do we have to wait a whole year for the next one?
I really loved it ♦ I thoroughly enjoyed the whole day ♦ I loved every minute of it
What a lovely atmosphere ♦ It was inspiring and stimulating and utterly wonderful from start to finish
I had a lovely time at SHAKE and it was very inspiring for me ♦ Very special
The weekend has brought back to me why I fell in love with theatre

PAST PRODUCTIONS, PAST FESTIVALS

A fully rehearsed reading, performed live and streamed to YouTube on July 31st, 2021, at 19:30
Due to the rise of the Delta variant, and concerns for the safety of our 25-strong team,
our rehearsed reading was performed on Zoom rather than at the theatre
at Sands Films Studios, as originally planned.

"There are strong supporting performances from Charlotte Hamblin’s dignified Hermione, Leo Wringer’s kindly and wise Camillo and especially Wendy Morgan as a forceful and grave Paulina whose few scenes are a particular highlight."
Maryam Philpott, The Review Hub

"Tim Fitzhigham’s Autolycus steals the show with actor-musicianship on a trusty guitar, with inter-scene interludes from Oliver Wass on the harp and Finn Collinson on the recorder. Barnaby Taylor’s Florizel was highly engaging, while Maia Jemmett as his lover Perdita makes the most of the relatively few lines she has." London Theatre 1. 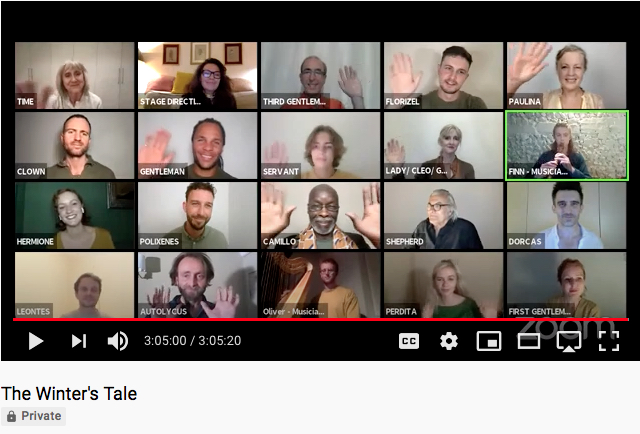 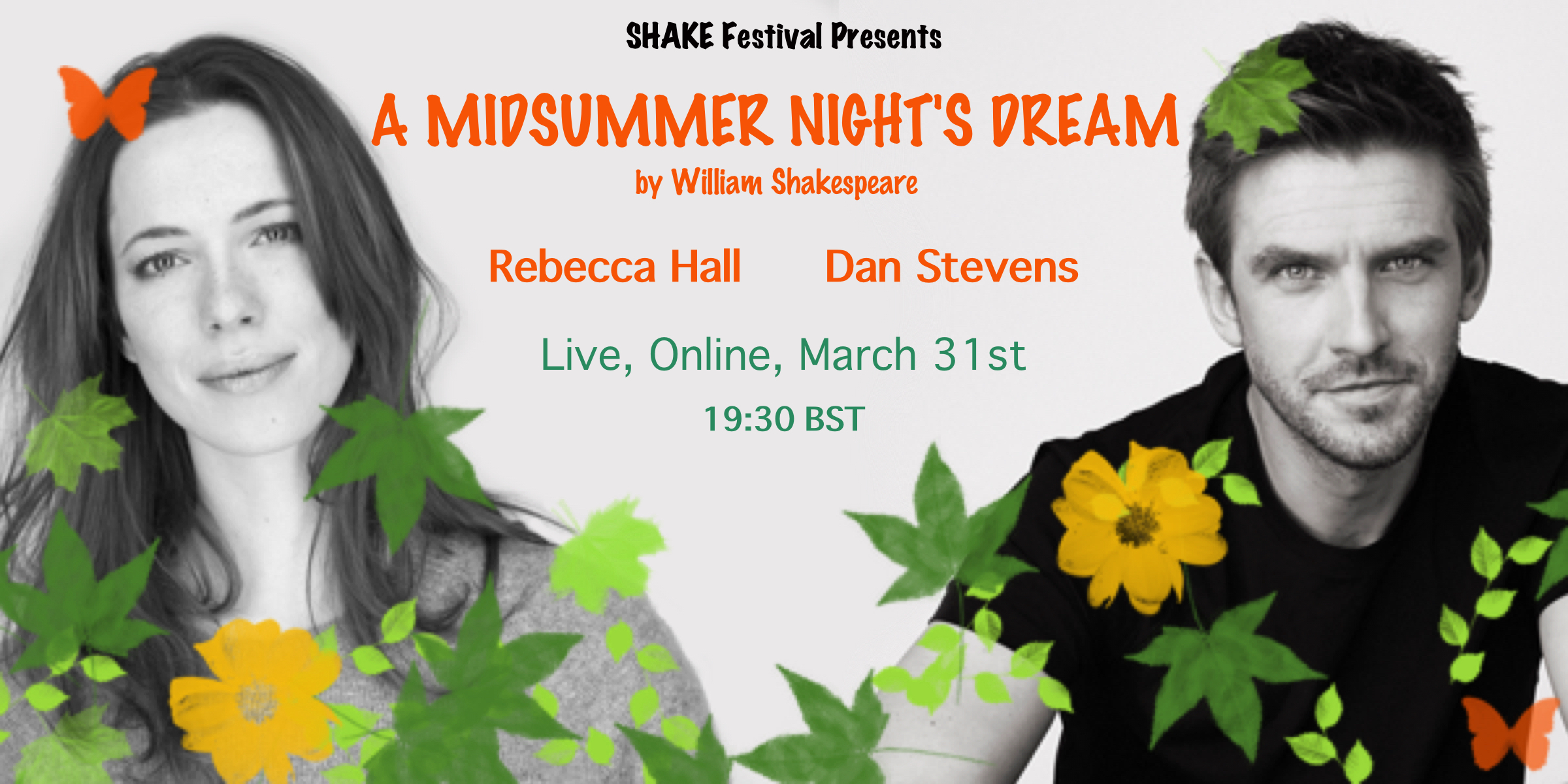 A Midsummer Night's Dream was performed once, live, online on 31st March 2021

The four Lovers were Daniel Bowerbank, Máiréad Tyers, Barnaby Taylor and Louis Rudnicki, and Egeus was played by David Sibley.

East Anglian locals in the cast included Malachy King, Daisy Martineau and Phoebe Martineau who played fairies, as well as Tim Fitzhigham (Flute/Thisby), Ed Hughes who played Snug/Lion and Richard Blaine who played Philostrate. Mia Lakha (The Prince of Egypt) and her sister Lana Lakha were Mustardseed and Moth in Titania's train. 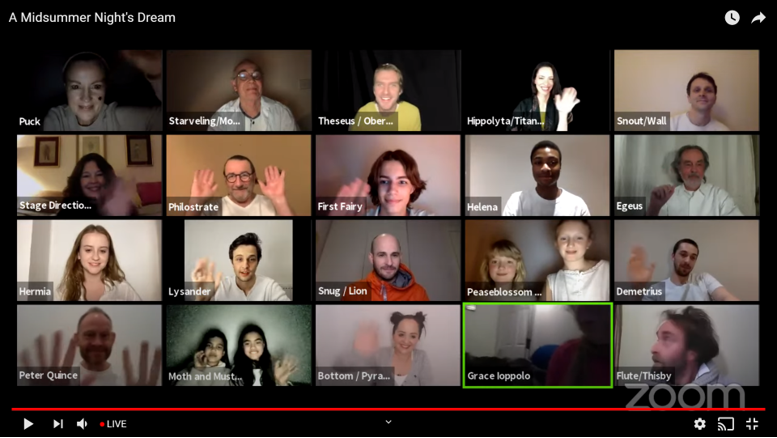 "Jenny Hall's emphasis on her starry reading of the play via Zoom lay very much with the text, which looked to be in safe hands at a rehearsal I eavesdropped on the previous week." Matt Wolf, The New York Times.

'Dan Stevens' suave performance as Oberon was a prime asset in this production of A Midsummer Night's Dream." The Times.

"A strong cast and a classic work allow this production to transcend limitations of the digital format." The Stage.

"Jenny Caron Hall brought a captivating reading filled to the brim with stars to our screens last night as part of her SHAKE Festival, which last year saw Geraldine James starring in The Tempest." Broadway World. 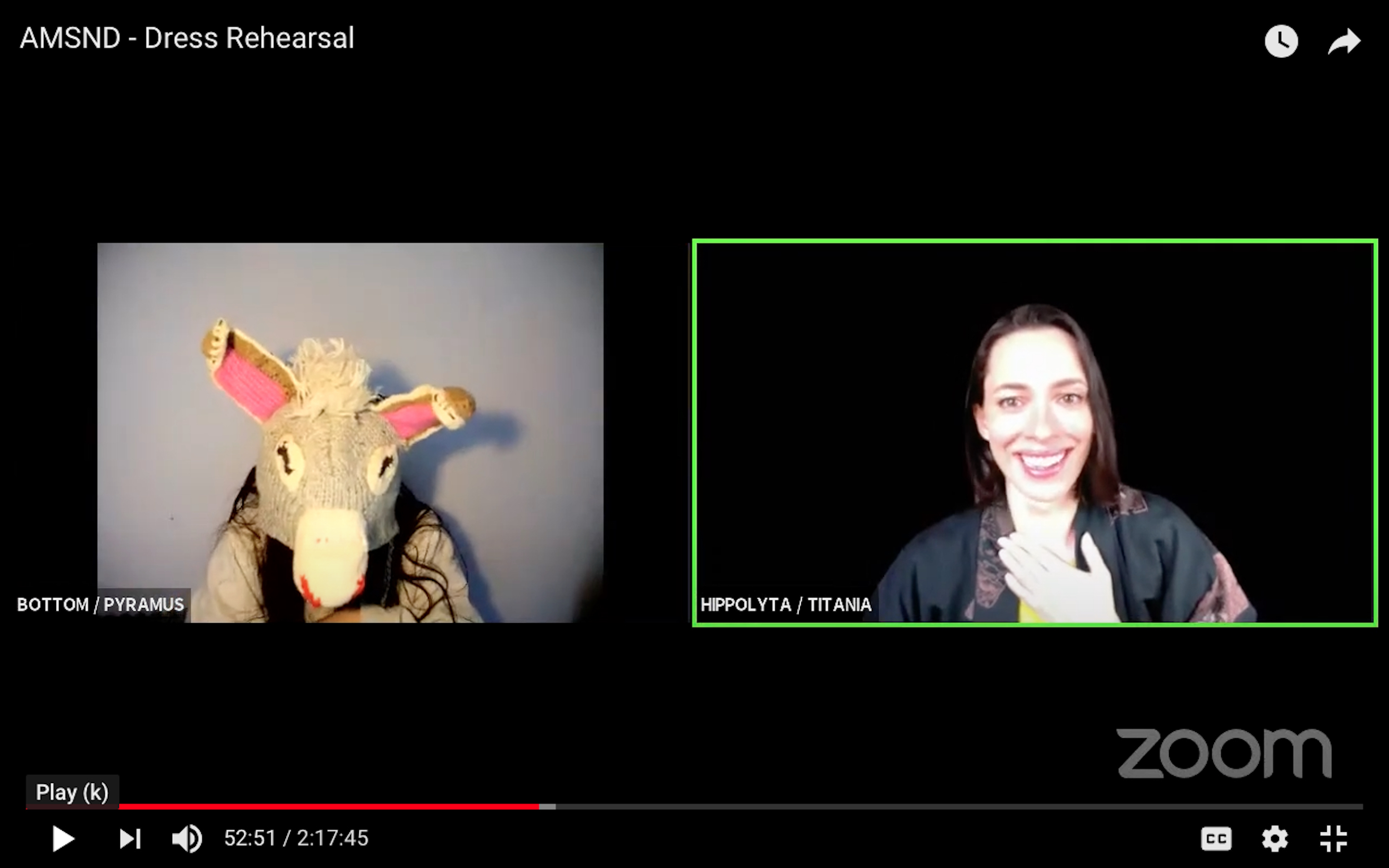 Absolutely brilliant.. cast was amazing.. well done to everyone. Thank you SHAKE festival...we were transported. what are you doing next? We can't wait(audience member)
"It was brilliant! So many highlights. Impeccable timing and superb cast!" Paul O.

I found that I noticed the beauty and the poetry of the language more than in a theatre. Maureen H.

Made me laugh a lot!" Sam R

"Thank you so much for bringing the theatre to our home (upper Bavaria, in my case)! Amazing performance - I loved it and am smitten with the cast! Athens royalty, Puck and Peter Quince's folks, you know that you are brilliant and I wish you could all have had three curtain calls at least. And those amazing young people should have had FLOWERS thrown to them! Thank you for this evening!" Sabine

A Selection of Sonnets and Music, starring Harriet Walter and Janet Suzman

"So moving and beautiful. Feels like an absolute gift today to have watched you all." Andrée C.

"A light in the darkness. Some order amongst the confusion. Thank you so much. Some calm in the storm. We loved it."
Louise C. 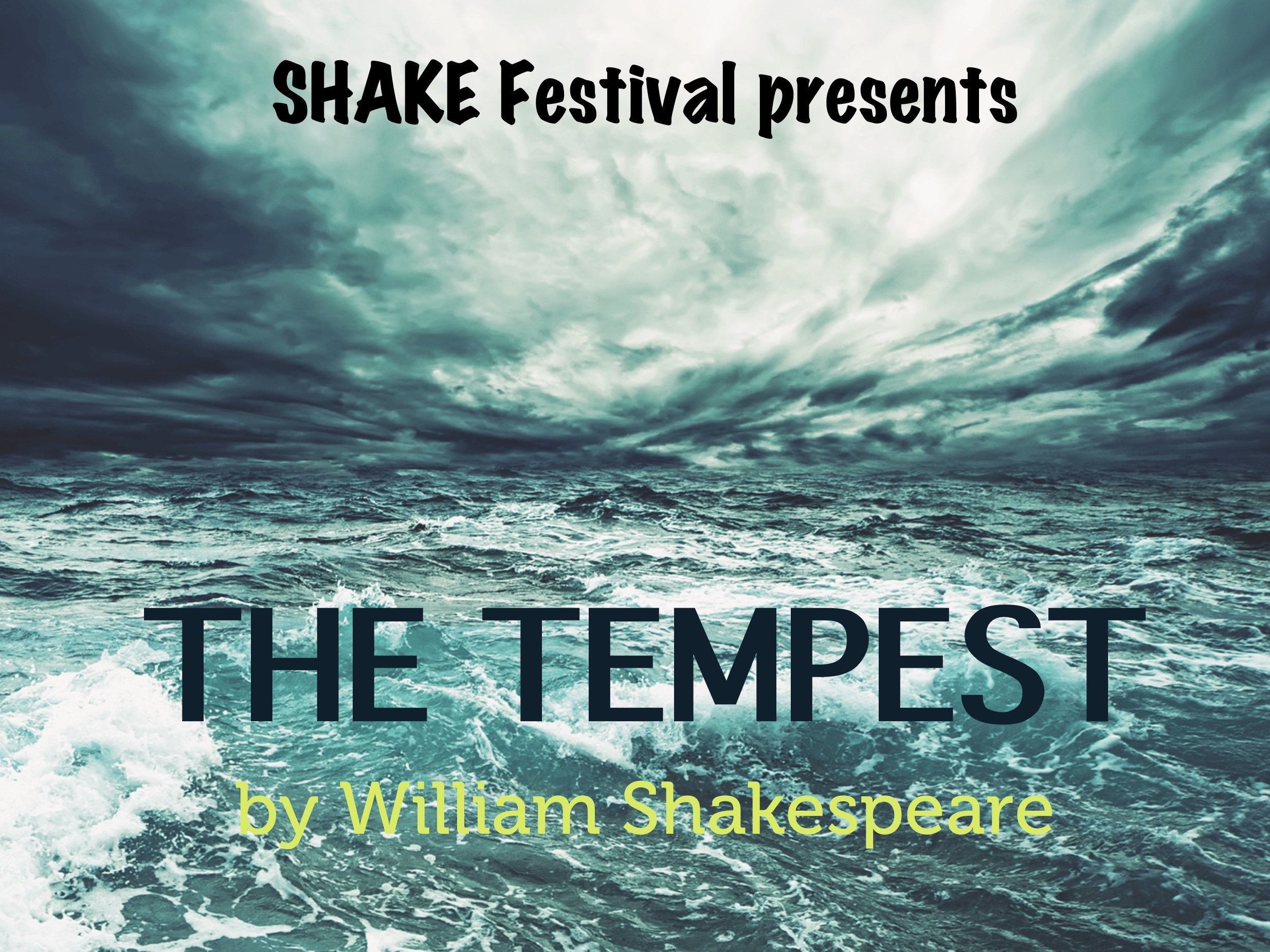 November 19th 2020
The Tempest was a fully rehearsed reading of Shakespeare's play, live-streamed to Youtube from zoom,

'Thank you so much. I had forgotten how much I missed the wonder and beauty of Shakespeare. I loved it.' Jane H.

'I have never listened so carefully, and so enjoyably' Peter A.

'You got the whole atmosphere without props or scenery, and Prospero's last speech brought tears to my eyes.

Everyone was so good.' Caroline W.

'Geraldine James's Prospero was wonderful - she brought such a different hue to the part and the play' Fiona M.

'OMG totally enthralling. Loved it all. Congratulations to all — now that's how to zoom Shakespeare!' Liz W.

The inaugural SHAKE Festival weekend was held at The Cut in Halesworth, 25/26/27 October 2019

FRIDAY 25 October The Three Inch Fools presented Much Ado About Nothing.

During October/November we also presented SHAKE Art - a selling exhibition in the Malt Room Gallery,

The Shakespeare Festival based in Suffolk, UK

SHAKE is a new Shakespeare Festival which began life at The Cut art centre in Halesworth, Suffolk, UK in 2019. The creative director is Jenny Hall.

The first weekend of events in 2019 revolved around workshops, films, talks with Q&A, music, poetry readings, dance, performance, and feasting!

Jenny Hall was invited to create this festival at The Cut by the late James Holloway. Since the pandemic struck, we've become creators of fully rehearsed online play readings, under the banner, SHAKE Festival Presents.